As long as I can remember, I have had to deal with the reddening of my face. I blush far too easily, and my face gets bright red with exertion. I played a lot of tennis in my youth, and people used to attribute the glow on my face to sunburn.

Many reasons a person's face might become red or rosy reflect emotional reactions such as anger, shyness, embarrassment or shame. Also hot flashes, a hormonal, rather than emotional red face issue I've been blessed with. Some people blush if they are suddenly the center of attention, while speaking in public, when they have been caught telling a lie or if suddenly encountering someone they have a crush on.

Technically speaking, blushing is due to the sudden arousal of the sympathetic nervous system. When a person feels uncomfortable (as they might in situations described in the previous paragraph), the small blood vessels in the face, ears, and neck dilate, turning the skin some shade of pink or red. One of the first signs of anger is a reddening of the ears.

As a writer, giving a character a red face is a way to describe him or her without having to state the obvious: he was angry, she was embarrassed. Over the years I have created a stockpile of  red-face expressions that I distribute where appropriate in what I write. Below are some of my favorites.

color flooded his face (or cheeks); she felt her cheeks heat up; shamefaced; her cheeks flamed as her mouth went dry; his face turned scarlet with anger; angry red glare; her color deepened; a pink glow rose from his neck to his hairline; blushed, flushed, reddened

I'm always looking for different ways to describe a red face, and will appreciate those you are willing to share


Posted by Ginger Dehlinger at 4:47 PM 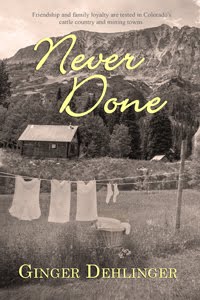 Blurb from Back Cover

Clara, fourteen and Geneva, sixteen are close friends until Geneva secretly marries Clara’s widowed father. Feeling betrayed by her pa and a girl she idolizes, Clara wants nothing to do with her new young stepmother. Geneva retaliates, beginning a clash of wills that lasts from 1884 to the flu epidemic of 1918.

Years go by without them speaking to one another. Geneva, bolder of the two, lives a life of ease in elegant homes with piped water and domestic help. She shops for the latest in women’s fashions and plays pinochle with lady friends.

For spite, Clara marries a handsome cowboy Geneva fancies, but she ends up living in a freezing cold cabin and a house infested with bugs. She takes in ironing and feeds miners to make ends meet, discovering love and purpose in the process. It takes a tragedy to bring her and her family together again. Can she and Geneva see this as an opportunity to put aside the past? Can they salvage a relationship that was once the center of their world?

Where to Purchase Never Done

You can also order a print copy at most bookstores.

If you would like a signed copy of Never Done, you can get one from me for $15.00 plus $3.00 postage mailed anywhere in the US.

If ordering from me, please send your check to 20725 Blacksmith Circle Bend OR 97702. You can also use PayPal.

Thank you for your support! 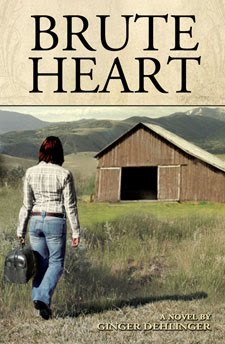 Blurb from Back Cover

Jordan Miller, a penniless Oregon farm girl, manages to work her way through college and veterinary school. Shortly after beginning her career she faces a gut-wrenching decision when her alcoholic father contracts a terminal illness and insists she use her veterinary training to end his life. Fearful of the man, even hating him at times after a lifetime of emotional and physical abuse, Jordan must decide whether to obey her father one last time.

On the brighter side, Brute Heart includes many warm and amusing animal stories in the James Herriot tradition. Alternating between thought-provoking and humorous, Jordan’s story will be enjoyed by animal lovers as well as fans of family dramas and hardship to recovery novels.

Where To Purchase Brute Heart

Soft cover copies of Brute Heart are available at Amazon and Goodreads for $12.00 plus shipping and handling ranging from $4.00-$5.97. If you order a signed copy from me, the price is $12.00 plus $3.00 for postage.
You can also order a print copy at most book stores.

When ordering from me, please send your check to Ginger Dehlinger 20725 Blacksmith Circle Bend OR 97702. You can also use PayPal.

Other places to buy Brute Heart